Edmonton, Alberta– November 16, 2022 – Green River Gold Corp. (CSE: CCR) (OTC Pink: CCRRF) (the “Company” or “Green River“) is pleased to provide the following information regarding exploration activities at its Kymar Silver Project which is located in southeast BC, approximately 28 kilometers west of the town of Invermere in the Golden Mining Division. . The property is made up of two mineral tenures, totalling 1,625 hectares, along the southeast flank of Mount Catherine. 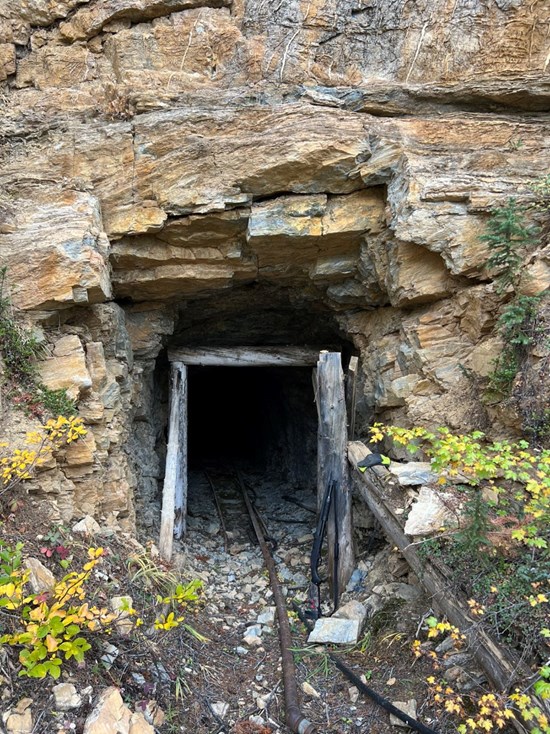 The 2022 geochemical program by Green River Gold Corp. was carried out from October 04th to October 09th and consisted of eight rock samples located close to the previous old Delphine Mine adit and fifty-four soil samples collected along the access trail to the old adit.

The soil samples were collected with a steel hand shovel from the B horizon situated about 20 to 30 inches deep. All of the soil samples were transferred into Kraft paper bags containing labeled waterproof tags. The tag numbers were also marked on outside of the Kraft bags. After each sample was collected, a geologist tied the Kraft bag with flagging and catalogued the unique tag number into a GPS device. 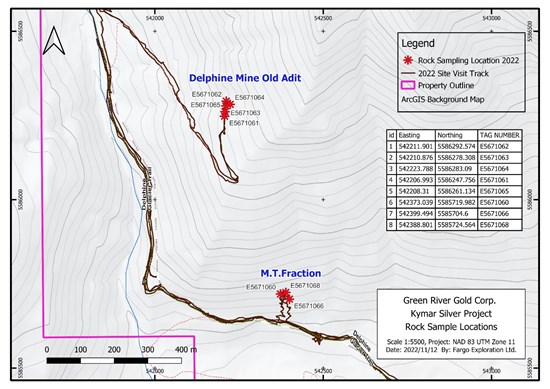 The soil samples were shipped to a secure storage facility at the Green River Gold Corp. office in Quesnel. The samples were tested with a handheld XRF analyzer, and QA/QC protocols were followed with the insertion of standards and blanks.

Before the soil samples were examined with the XRF analyzer, the samples were dried in a portable oven at 60 degrees Celsius, sieved to -177um, and saved in a labeled Ziplock plastic bag. The XRF analysis on the sieved sample was carried out by a Qualified Geologist.

History of Production on the Kymar Silver Project

Delphine (Minfile 082K SE032): The Delphine mine occurrence consists of a quartz-carbonate vein 0.3 to 1 meter wide along a normal fault. The fault strikes 150 degrees, dips 78 degrees northeast, and cuts the middle dolomite member of the Mount Nelson Formation. Ore minerals include galena and tetrahedrite with minor sphalerite, pyrite and chalcopyrite (Open File 1990-26, page 32). The vein, where it has been stoped for 60 meters, had an average width of 1 meter and was made up of massive galena (Minister of Mines Annual Report 1898). Total production from the Delphine Mine yielded 614,315 grams of silver, 3025 kilograms of copper, and 46,880 kilograms of lead from 170 tonnes mined.

M.T. Fraction (Minfile 082K SE055): The M.T. Fraction is hosted within dolomite of the Mount Nelson Formation. The occurrence consists of a quartz-carbonate vein 20 to 30 cm wide, which has been explored within a small adit. Limited production within the adit at the turn of the century yielded 254,641 grams of silver, 1655 kilograms of copper, and 39 kilograms of lead. Ore minerals included galena, tetrahedrite and chalcopyrite with minor sphalerite. The vein is within a dilatant zone along a normal fault that strikes southeast and dips 80 degrees west.

White Cat (Minfile 082K SE040): The White Cat occurrence is within the middle dolomite member of the Mount Nelson Formation below a north trending overthrust fault that separates the Mount Nelson and Dutch Creek formations (Open File 1990-26). Mineralization is associated with a quartz vein 0.6 to 2.5 meters wide that follows an open gouge zone for 75 meters along strike. The vein strikes 050 degrees and dips 70 degrees northwest. Massive galena with minor tetrahedrite occurs throughout the vein in lenses 2 to 3 meters long and 0.5 meter wide. The vein has been developed with several small adits and trenches. Limited production between 1924 and 1928 yielded 154,893 grams of silver and 80,644 kilograms of lead from 152 tonnes mined.

Beulah (Minfile 082K SE057): The Beulah prospect has been explored with several trenches and a 45-meter-long adit. Mineralization is hosted within a sheared quartz-barite vein cutting the middle dolomite member of the Mount Nelson Formation (Open File 1990-26). The vein varies in width from 5 to 60 centimeters and has been followed along strike for a distance of 150 meters. Galena, bournonite, sphalerite and tetrahedrite occur as narrow streaks and massive pockets the entire length of the vein. Malachite and azurite are common in surface exposures. In 1926, a 52 tonne ore bulk sample was collected from the adit and shipped to the Trail smelter. Although recovery from the bulk sample is not known, the average grade of the shipment was 2000 grams per tonne silver, 57 per cent lead, 0.8 per cent copper and 3.4 grams per tonne gold (Property File – Galloway, J.D. (1926): Report on Key Group

BC Tilbury (Minfile 082KSE056): The BC Tilbury occurrence consists of a 30- to 50-centimetre-wide quartz vein containing galena and tetrahedrite within Mount Nelson dolomite (Open File 1990-26). The vein has been explored with a small, 15-metre-deep shaft and a 75-meter-long drift. A total of 79 tonnes were sporadically mined from the vein between 1905 and 1927. Total production yielded 198,873 grams of silver, 41,415 kilograms of lead and 427 kilograms of zinc. 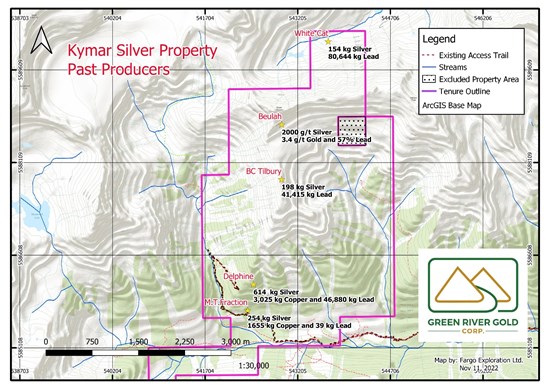 Stephen P. Kocsis is the qualified person as defined by National Instrument 43-101 and he has reviewed and approved the technical information in this news release.

The Fontaine and Quesnel properties straddle an 18 km length of the Barkerville and Quesnel Terranes and are contiguous to Osisko Development Corp.’s mineral claim group containing a proposed mine location at its Cariboo Gold Project.

The Kymar Silver Project is located in southeast BC, approximately 28 kilometers west of the town of Invermere in the Golden Mining Division. The property is made up of two mineral tenures, totaling 1,625 hectares, along the southeast flank of Mount Catherine.

Additional information about Green River Gold Corp. can be found by reviewing its profile on SEDAR at www.sedar.com.

The securities of the Company have not been registered under the United States Securities Act of 1933, as amended, and may not be offered or sold in the United States absent registration or an applicable exemption from the registration requirements. This release is issued for informational purposes only and does not constitute an offer to sell or the solicitation of an offer to buy any securities, nor shall there be any sale of any securities in any jurisdiction in which such offer, solicitation or sale would be unlawful.

The Canadian Securities Exchange (operated by CNSX Markets Inc.) has neither approved nor disapproved of the contents of this press release.