The Kymar project is located in South Eastern British Columbia, approximately 28 KM West of the town of Invermere in the Golden mining division. The property is made up of two mineral tenures, totaling 1,214.32 hectares, along the South East flank of Mount Catherine.

The Kymar Silver Project has an appreciable amount of historical data that our team has been compiling and interpreting. During this process we have identified multiple pasts producing artisanal mines, with encouraging historical ore grades. This data is aiding in the design of our 2021 work program on the project to confirm the historical results encountered on the property while identifying targets for further evaluation.

The mineralization found at the Kymar Silver Project to date consists of polymetallic veins hosted within the Purcell Supergroup strata, which includes the Mount Nelson and Dutch Creek formations. The historically mined ore included galena, tetrahedrite, chalcopyrite and minor sphalerite.

Regionally, the area is underlain by Proterozoic clastic sedimentary rocks of the Purcell and Windermere supergroups and by Lower Paleozoic strata of the Beaverfoot and Mount Forster formations (Geoscience Map 1995-1)

The Kymar Property is host to polymetallic veins (Ag-Pb-Zn+/-Au) within a dilatant zone along a normal fault, which strikes South East and dips 80 degrees West. (BC Minfile 082KSE055) 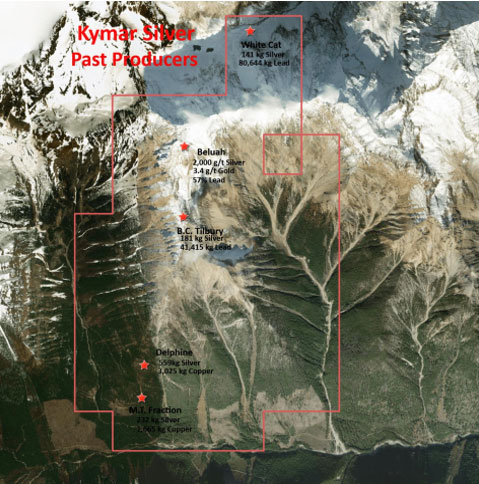 The Kymar Project is home to several past producing mines as shown in the following map.

The M.T. Fraction is hosted within dolomite of the Mount Nelson Formation. The occurrence consists of a quartz-carbonate vein 20 to 30 centimeters wide which has been explored with a small adit. Limited production at the turn of the century yielded 254,641 grams of silver, 1655 kilograms of copper and 39 kilograms of lead. Ore minerals include galena, tetrahedrite and chalcopyrite with minor sphalerite. The vein is within a dilatant zone along a normal fault that strikes southeast and dips 80 degrees west. (Minfile 082KSE055)

The Delphine mine occurrence consists of a quartz-carbonate vein 0.3 to 1 meter wide within a normal fault. The fault strikes 150 degrees, dips 78 degrees northeast and cuts the middle dolomite member of the Mount Nelson Formation. Ore minerals include galena and tetrahedrite with minor sphalerite, pyrite and chalcopyrite (Open File 1990-26, page 32). The vein, where it has been stoped for 60 meters, had an average width of 1 meter and was of solid galena (Minister of Mines Annual Report 1898). Total production from the Delphine yielded 614,315 grams of silver, 3025 kilograms of copper and 46,880 kilograms of lead from 170 tonnes mined. (Minfile 082KSE032)

The White Cat occurrence is within the middle dolomite member of the Mount Nelson Formation below a north trending overthrust fault that separates the Mount Nelson and Dutch Creek formations (Open File 1990-26). Mineralization is associated with a quartz vein 0.6 to 2.5 meters wide that follows an open gouge zone for 75 meters along strike. The vein strikes 050 degrees and dips 70 degrees northwest. Massive galena with minor tetrahedrite occurs throughout the vein in lenses 2 to 3 meters long and 0.5 meter wide. The vein has been developed with several small adits and trenches. Limited production between 1924 and 1928 yielded 154,893 grams of silver and 80,644 kilograms of lead from 152 tonnes mined. (Minfile 082KSE040)

The Beulah prospect has been explored with several trenches and a 45-meter-long adit. Mineralization is hosted within a sheared quartz-barite vein cutting the middle dolomite member of the Mount Nelson Formation (Open File 1990-26). The vein varies in width from 5 to 60 centimeters and has been followed along strike for a distance of 150 meters. Galena, bournonite, sphalerite and tetrahedrite occur as narrow streaks and massive pockets the entire length of the vein. Malachite and azurite are common in surface exposures. In 1926, a 52-tonne ore bulk sample was collected from the adit and shipped to the Trail smelter. Although recovery from the bulk sample is not known, the average grade of the shipment was 2000 grams per tonne silver, 57 per cent lead, 0.8 per cent copper and 3.4 grams per tonne gold (Property File – Galloway, J.D. (1926): Report on Key Group) (Minfile 082KSE057)

The occurrence consists of a 30- to 50-centimetre-wide quartz vein containing galena and tetrahedrite within Mount Nelson dolomite (Open File 1990-26). The vein has been explored with a small, 15-metre-deep shaft and a 75-meter-long drift. A total of 79 tonnes were sporadically mined from the vein between 1905 and 1927. Total production yielded 198,873 grams of silver, 41,415 kilograms of lead and 427 kilograms of zinc. (Minfile 082KSE056) 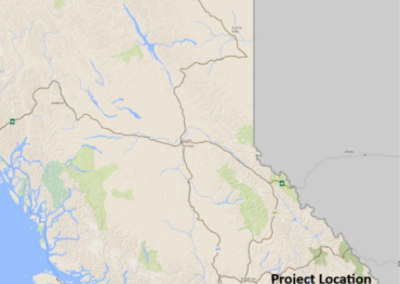 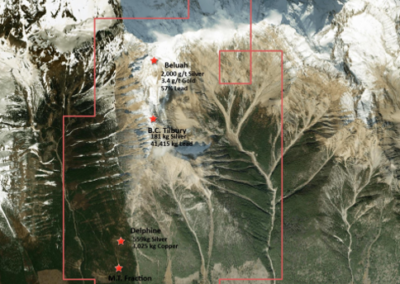